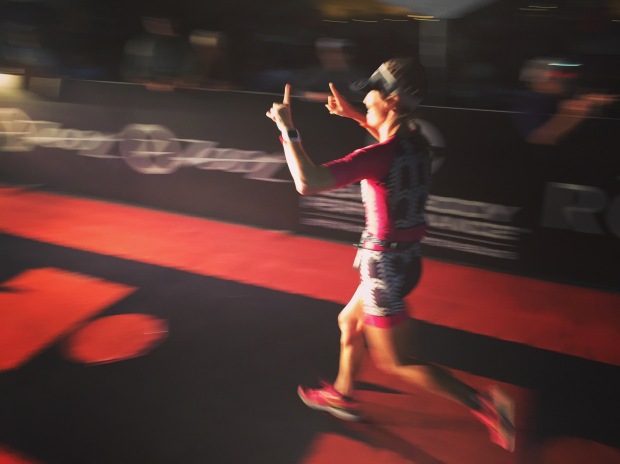 I woke up in the middle of the night before race morning as usual but other than that everything was great leading up to the race. I did all the training that was given to me and for once I really enjoyed every single week. Sure there were a few weeks that I was a bit overwhelmed with everything on my plate, but I knew that if I wanted to meet my goal I had to find a way to make it work. That was my mind set for my training, and it worked.

The goal for the race was to go under 11 hours, place top 10, and preferably place top 5. I only had control over the first one so that was the most important. For those of you that only want the numbers you can find the Garmin data here or see the times below:

The swim was excellent! It was a super slow rolling start because they were only letting us into the lake in two single file lines. This meant it was NOT crowded at all. Besides whacking somebody’s elbow with my forearm, there was very little contact. I felt like I didn’t pick the best lines but when I compare my swim distance to others that use Strava I did pretty well. 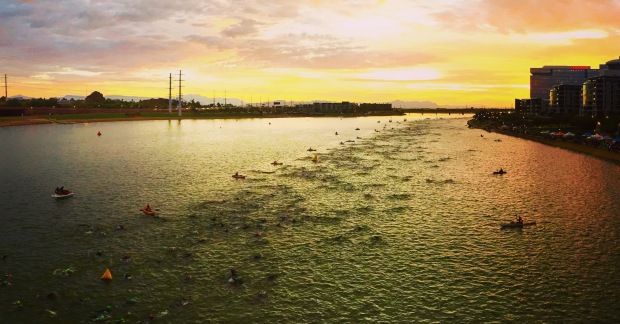 Out of the swim and on to the bike. I heard a bunch of people yell my name as I ran to transition. It is so great to do a race where you have a lot of people that know your face! It makes a huge difference! Pretty simple transition as I like to keep it simple. I even had a friend in T1 that helped me so that is a bonus as well. 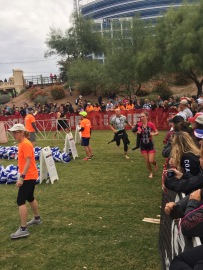 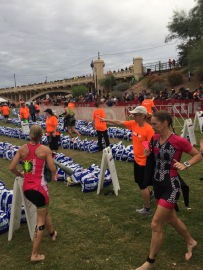 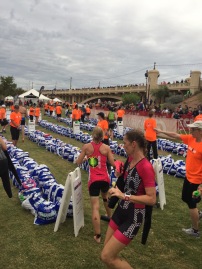 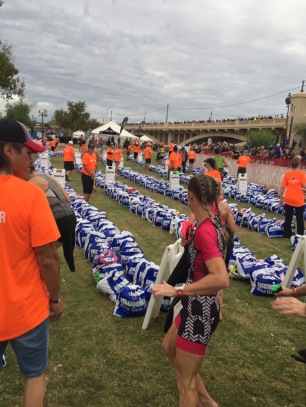 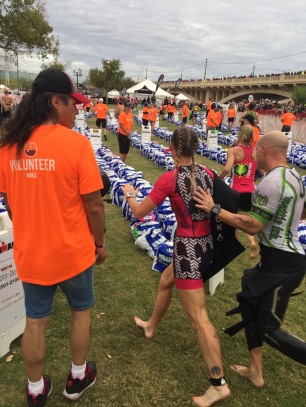 On the bike the goal was to push 150 watts all day long. I knew I could do that and I wanted to do it so bad. Along with that power goal was the goal of breaking 6 hours on the bike. The course was very windy on the way out but had a decent tail wind on the way back. Each lap was really close to 2 hours so I knew it was going to be really close to break 6. Except for some guys riding in packs and making passing tough it was a very quiet ride. I usually stop during the ride to get water but I knew if I was going to go under 6 I had to keep pedaling, there was no time to stop. This was truly becoming a mind of matter race! I didn’t make the power goal but I did make the time one. 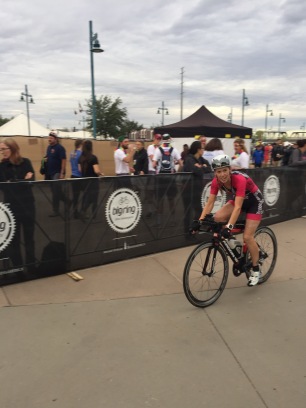 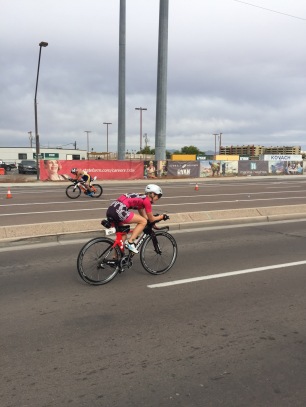 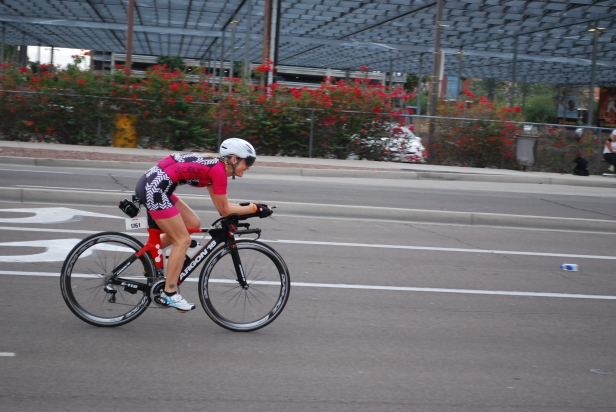 I rolled into T2 and just went under 6 hours!!! YAY!!!! When I got off my bike I could hardly standup straight. I had spent SOOO much of the ride in aero (the best way to manage the headwinds) so my back was super stiff. I trotted off to get my bag, found a volunteer and sat down in the chairs outside the tent. If you don’t need to actually change your clothes you should always opt for this if they have it. It is WAY less chaotic and you can see so much better. I had spent a lot of time before the race planning my transitions and that really paid off. Keep it simple is my motto and it works! I did do a sock change because I have found that lubing my feet a bunch before a run really helps with blisters between my toes. Totally worth it! I ran out of transition with my bag of nutrition and glanced at my watch. The A goal was sub 11 hours. I ran out with 7:15 showing on my watch. That meant I had to run 3:45. While this was a bit faster than I had originally planned I knew it was not impossible. All my training runs were well with in that range.

When I first ran into Stuart and my Coach Jen I was thrilled to see them. I was having trouble seeing out of my right eye (this started on the ride) but Jen reassured me I didn’t need that to run! Thanks Coach! This only was an issue when I had to run on any uneven surfaces. When I saw them a second time (about a mile later) I asked what the pace was to run the 3:45. They did the math and came ran up to tell me it was 8:33/mile. I was really hoping they were going to tell me 8:45! I thought about it for a moment while I was running and knew I had to go for it. I knew that was not an impossible pace for me but I wasn’t totally sure how long I could hang on. I was ready to find out. I kept on top of my nutrition by trying to eat every 4 miles or so and I alternated water with a caffeine drink at every other aid station. I had not used the bathroom since the swim and I knew I would feel a lot better if I peed but there was no way I was going to stop for that! So this was the race I finally crossed over to a person who pees on themselves. Best. Thing. EVER!!! I did smell pretty gross by the end but I did not care at all! Stuart and Jen caught me at a couple of pre-determined spots on course and I had a bunch of friends sprinkled all over the course. Every cheer was heard and helped! I was trying to pass as many ladies in my age group as I could as I was really hoping for a top 10 finish. I kept a careful watch on my time and when I hit 16 miles on the run I knew I had 10 miles left. I had 90 minutes to stay under 11 hours and I knew that meant I only had to hold 9 minute miles to do it! I knew I was going to make it! Just kept running making sure that every mile was still under 9 minutes because everyone that was meant I was going to meet my goal. The last 10 miles were tough but there was nothing that would stop me. 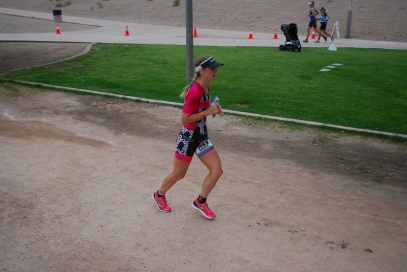 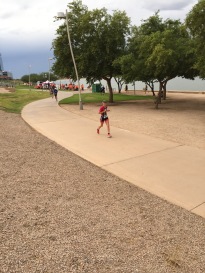 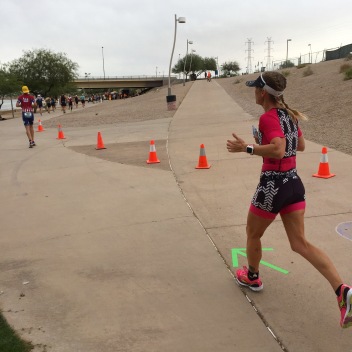 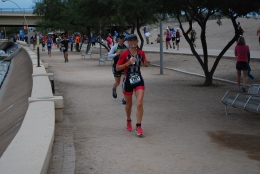 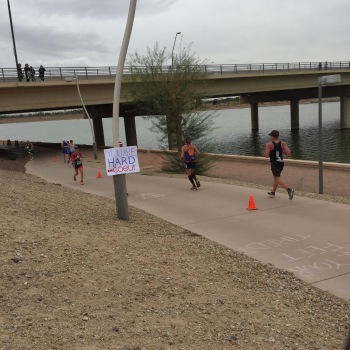 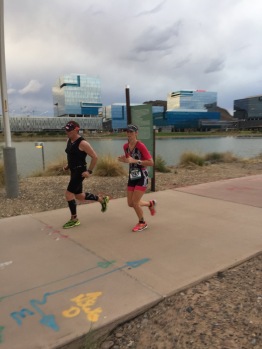 This race was about two things for me. First, respect and take your training seriously. I choose to spend a lot of my time on this so I want to make it count! I am so lucky to have all the tools available to me (an awesome coach, a supportive husband, a supportive team, and excellent equipment) so I better make good use of them! Second, believe in yourself. Because I took my training seriously I really knew what my body was capable of. That, coupled with truly believing in myself, made for a very successful day! I see and hear so many athletes who express doubt in their abilities and make excuses when things go bad. There are many things you can’t control on race day, but you can control all the training you put in and you can absolutely control your mindset! There is nothing special about me except I truly believe I can do this and I can do it well! 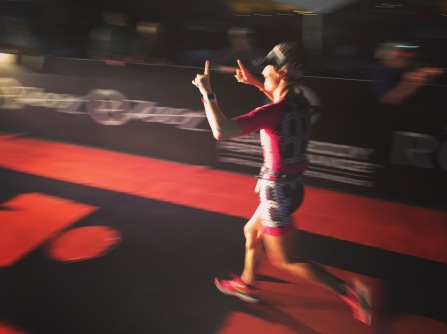 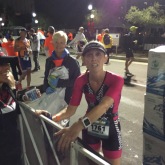 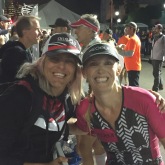 Pictures by Stuart and Jen. Having them on course was amazing!!!