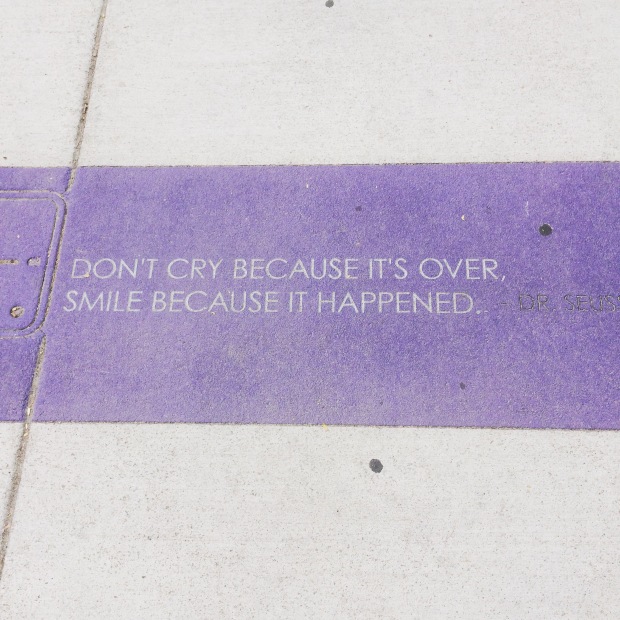 I really don’t want to make this super long so I will try my best to keep it short. If you have specific questions, PLEASE ask! I am happy to answer any questions, even the gross and embarrassing ones.

For those of you that just want the times and Garmin data here you go.

If you want the narrative, keep reading!

We went out to Colorado a week before the race and worked remotely so I could acclimate to the altitude. This also allowed me to do all my training for the week on course!

We made it to the welcome ceremony on Friday evening after a really busy day especially because Rinny was going to be there signing autographs. Little did I know that Siri Lindley would be there as well (Rinny’s Coach). I have been following her on Instagram and I really love her attitude and postings. She spoke to the crowd about believing in your self and having gratitude in your life. I waited until after the ceremony and I went up to her and told how much I appreciate her voice and positive energy in the sport. She was BEYOND gracious and nice. She gave me a bracelet which I wore during the race (and I am still wearing right now) that says “Believe” and “Gratitude”. 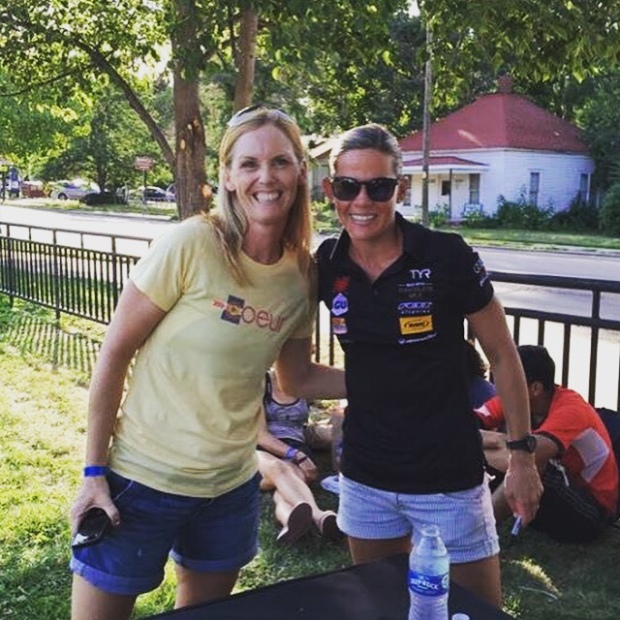 You know, just Rinny and I! 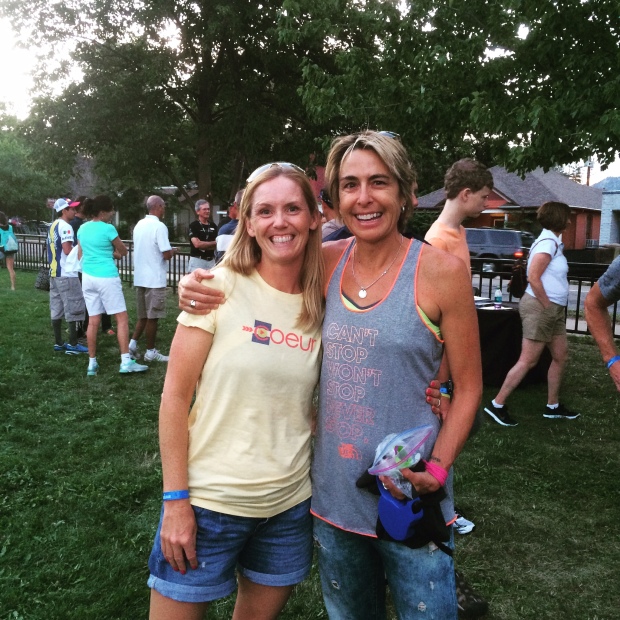 Saturday was the usual craziness with dropping off bikes and gear bags and doing final double checks that we had every little thing needed. I still needed to cook my Skratch Labs Portable Sweet Potato Cakes and get my feet up at some point. It is really hard to rest the day before and Ironman because there is just so much to do. When all was said and done I was trying to go to sleep by 9:00 PM.

Alarm went off at 3:45 and we were out of the house on time at 4:30AM. We drove to Boulder High School to catch a buss out to the swim location, the Boulder Reservoir. We really should have arrived 15 minutes earlier because parking and special needs drop off was kind of a pain. On the drive over we heard that the water was too warm to be wetsuit legal. I was glad to hear this early so I could let it sink in. It wasn’t a huge deal to me and I thought it might work in my favor.

We finally got out to the Rez and I started getting ready for the race. I needed to put water on my bike, visit my bike transition bag, and get my skin suit on. It was really chaotic at the swim location so this ended up being fairly stressful and I just barely made it to the swim start on time. But I did! 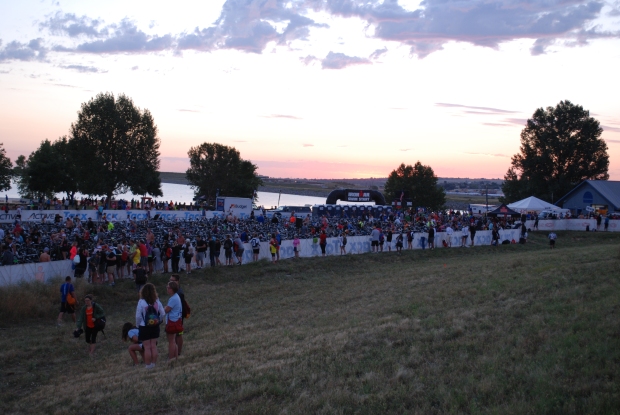 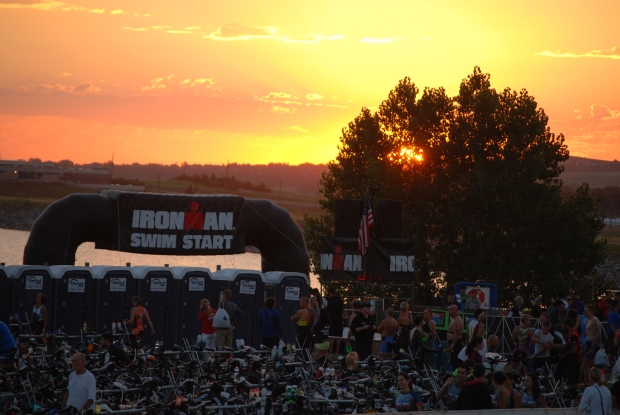 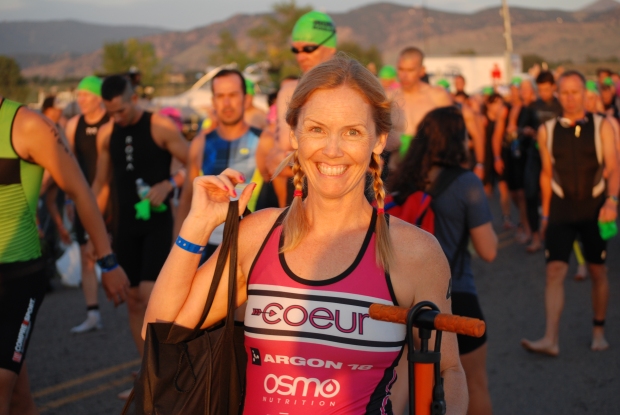 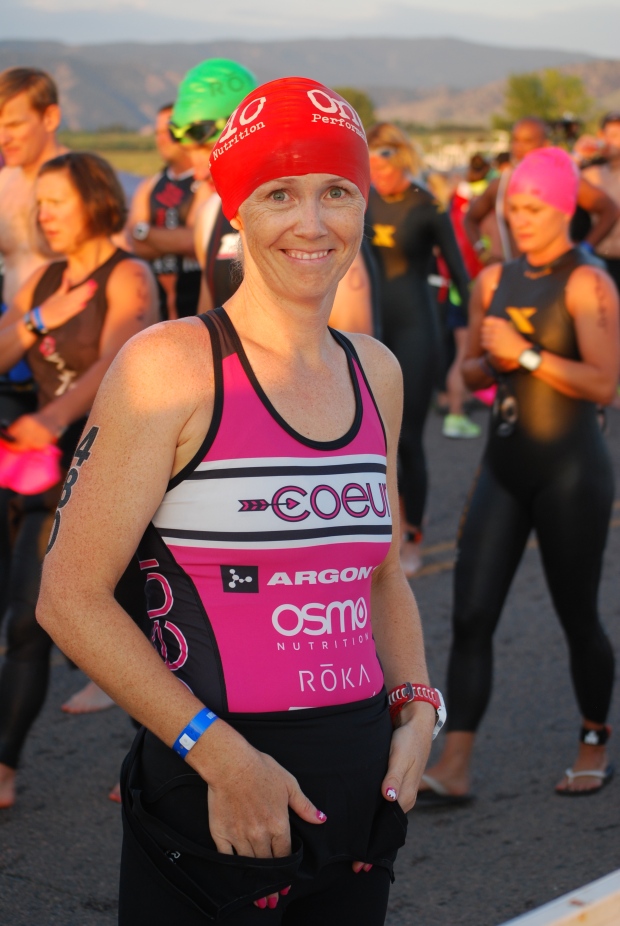 I did not wear a wetsuit because I wanted to be eligible for age group awards and maybe a slot for Kona. I wiggled my way to the back of the 1-1:15 swim group and waited for the canon. Everyone filtered in very fast so there wasn’t much space between the groups. This led to a VERY crowded swim. I had been hoping that the swim was going to be easier than Arizona. I was wrong. The lack of wetsuits made everybody a bit nervous and for some reason we were all really close together. The first half of the swim was really tough. At the first turn someone actually swam on me! He apologized so that was nice. I was so concerned that someone would pull off my chip! After the second turn things were much better and I just kept swimming. Out of the water I grabbed my bag and got changed and on my bike as fast as possible. It was a fairly long run from the changing tent to my bike and then to the mount line. 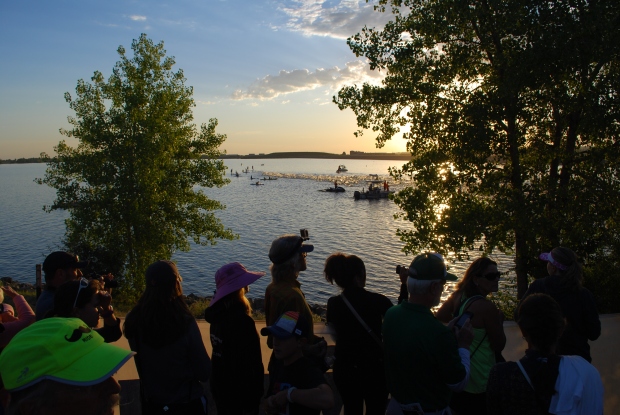 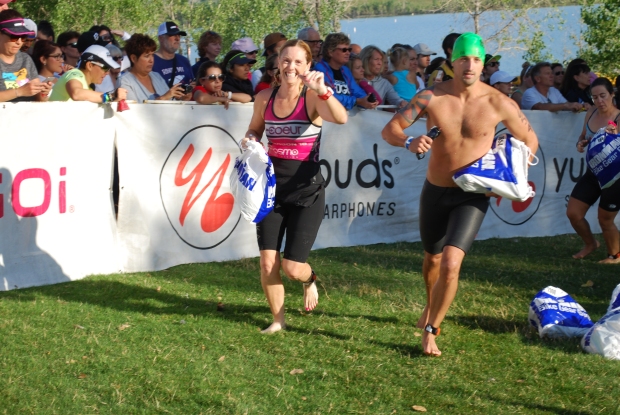 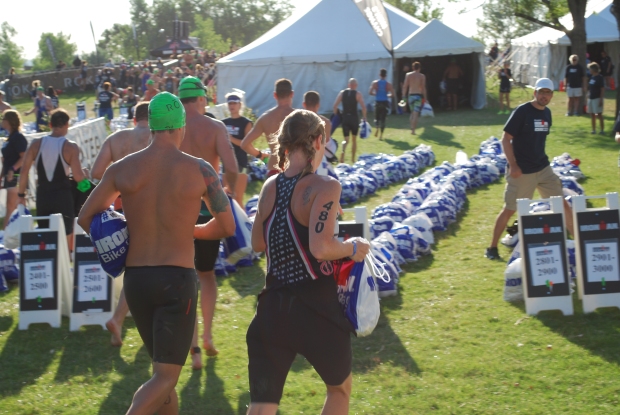 I had pre-ridden almost the entire course so there weren’t too many surprises. You can read about the course more here. Because I am a fairly strong swimmer that means I get passed a lot on the bike. Most of the passing happened during the first loop (there are essentially three loops). What I found strange was that people would pass you VERY closely. There were a couple of women that practically cut me off when they passed me! After the first loop most of the passing stopped and I just chugged along.

This was my first race with a power meter. I set up my Garmin 500 bike computer to display my Power zone and my Heart Rate zone. I watched those two numbers to makes sure I wasn’t working too hard (I tried to stay in zone 2-3 for the whole ride). I was eating well and drinking a lot of water. I probably ate 4 banana halves, 4 sweet potato cakes, and two Hawaiian roll PB&J sandwiches. I did not eat a single Gu or gel or chew. Real food only! Also, I stopped at the aid stations to fill up my water bottles. I am not that comfortable to grab a bottle and re-fill my bike while riding.

I cannot say enough good things about this ride course. It may be the reason I go back in 2016! It is truly awesome! At the top of the last climb Skratch Labs was there making snow cones for the riders! It got warm a few times on the bike but never that bad. Highlight of the ride was finishing with my friend Punk Rock Racing!

I dismounted and ran my bike for what felt like forever! It is a really long way between the dismount line and where the bike catchers take your bike. Then you have to run a fair bit to get your bag and get to the change tent. It isn’t the distance I mind but running with your bike in bike shoes is kind of a pain. Some day I will be cool and figure out that whole leaving your shoes on the bike thing. I changed into my running shoes, grabbed my Ziploc bag of goodies, hit the potty, got sun blocked, and I was on the run! 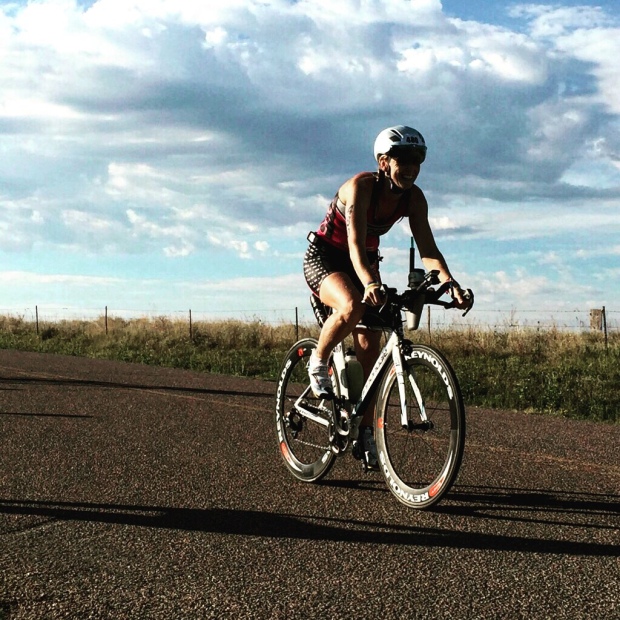 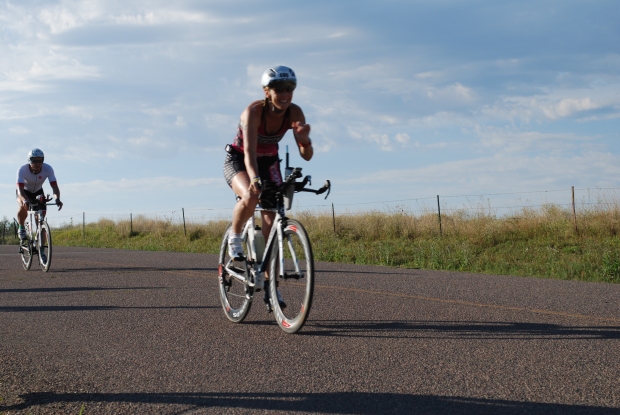 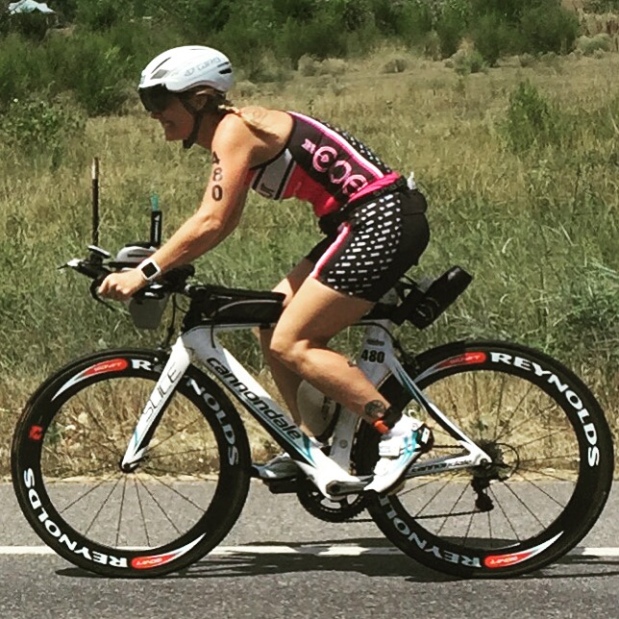 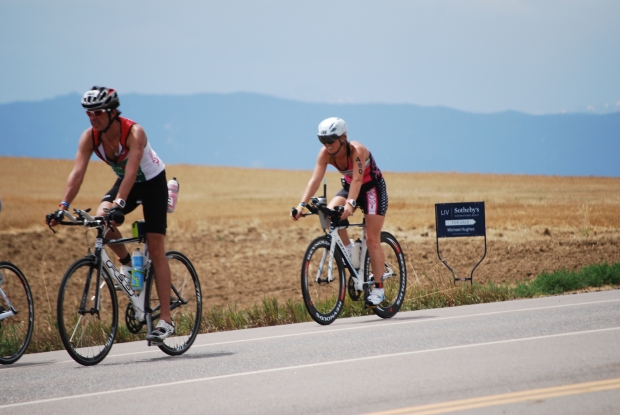 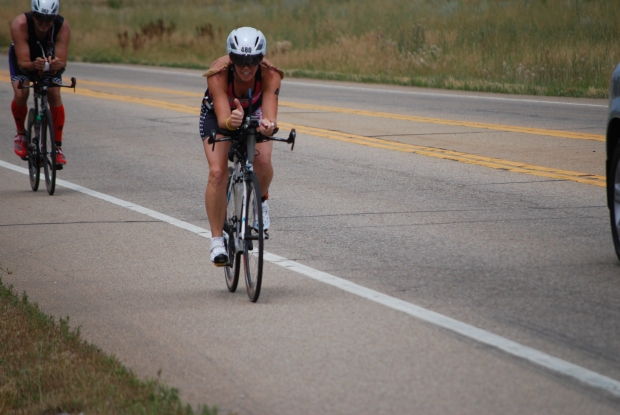 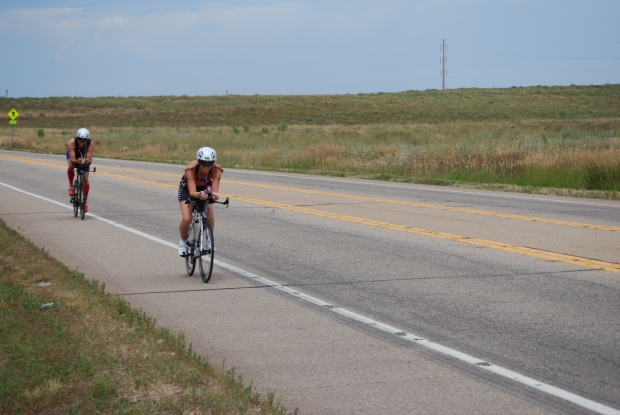 I had high hopes of running under 4 hours. I very quickly realized that this would not be my race to do that. I clicked off the first two miles at sub 9 min pace but I could tell that I wouldn’t be able to sustain that. For the first time that day it got a bit dark in my head. I realized what was happening and hatched my plan B, walk the aid stations and ONLY the aid stations! If I could do that for the race I still had a chance of running under 4:30. I can’t say how much the crowd support helped. Just hearing my name would brighten the moment for me. To hear people telling me my pace looked good and I looked great would give me an extra boost. Then when I would see Stuart or my family or anyone else I knew on course I would perk up a bit.

The run essentially has two-way traffic on every section so you can see who is in front or behind you. This is also a great thing because you can see whom you are gaining on or who is gaining on you. I had lost 25 spots on the ride (that is normal for me) but I got back 18 of them on the run. Not to mention how many others I passed that weren’t in my age group. The key to Ironman (in my opinion) is to ride within your self on the bike and pace yourself on the run. I passed many people on the run that had passed me on the bike. This makes for some great motivation as well!

I drank WAY too much caffeine early in the run and did not feel well so I switched to water for the middle miles then allowed myself a bit of coke or Red Bull. Eating was hard so I had one Power Bar smoothie and a chocolate Cliff Gel. I ate some grapes but I could hardly eat anything else. I almost always was running with a cup of ice with some fluid between aid stations. I didn’t take a water bottle with me because I knew I would drink too much at one time. Using the aid stations for hydration helps me from taking in too much at one time.

The run was great because I got to see all of my friends on course. The race can be very lonely until the run. Then is becomes a big party. I couldn’t talk much but it was so great to see everybody and just enjoy the event. 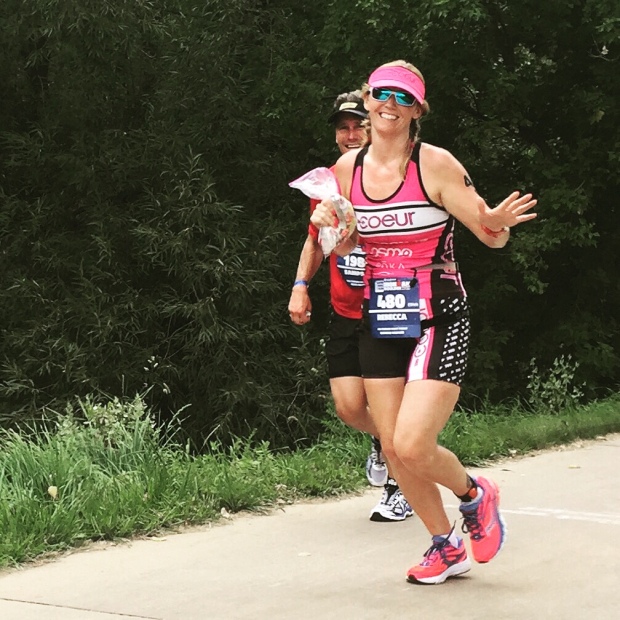 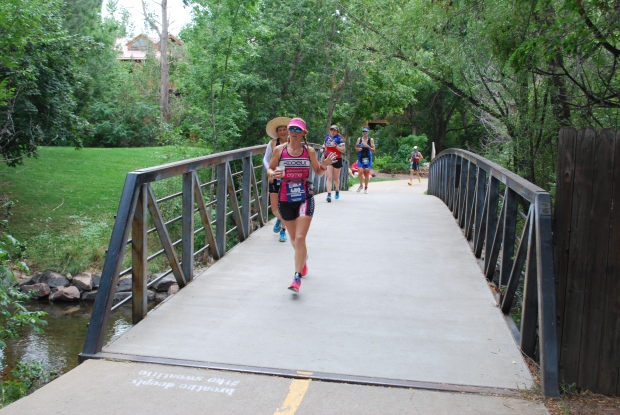 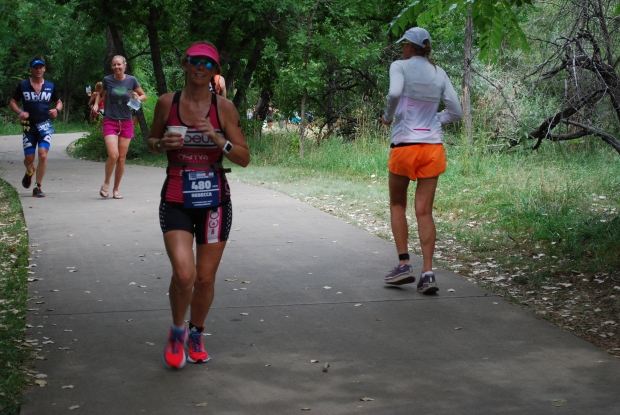 Finally I made the last turn down hill towards the finish and just did what I could to finish strong. My quads and feet were killing me but I knew it would be over soon. I hit the chute, saw my family and just ran it in as best I could. I kept looking over my shoulder because I didn’t want to get passed at the end and get a crappy picture. I know that is silly but once you get to the chute you should give people space to finish unless you are racing them for a place. Those of use finishing after 12 hours are really not in contention so just chill people!

Stuart found me after I finished and made sure I ate some food this time. I signed up for a massage and chatted with my family until it was my turn. 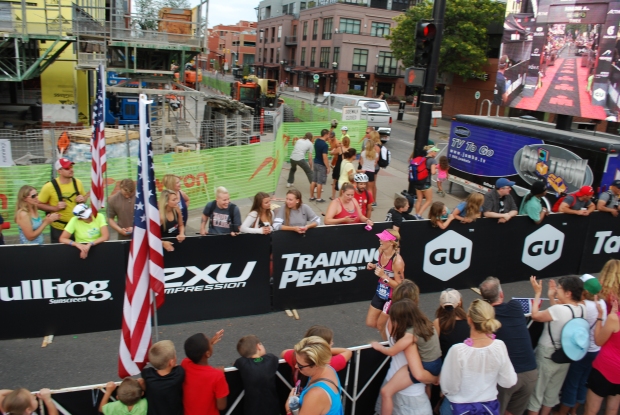 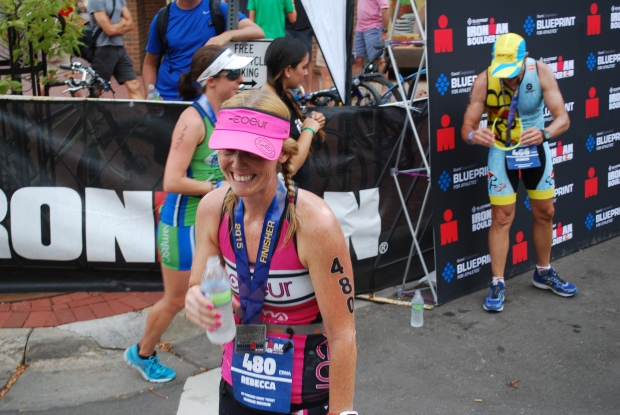 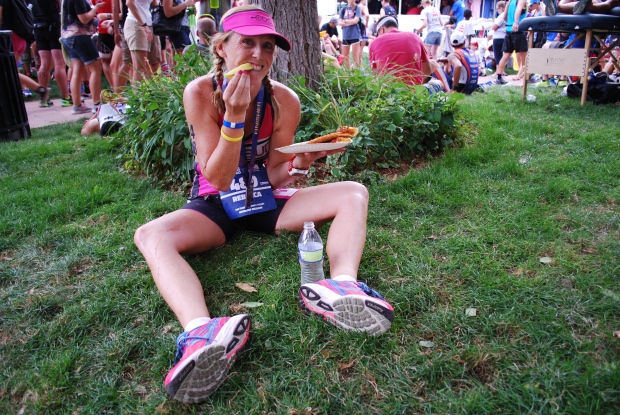 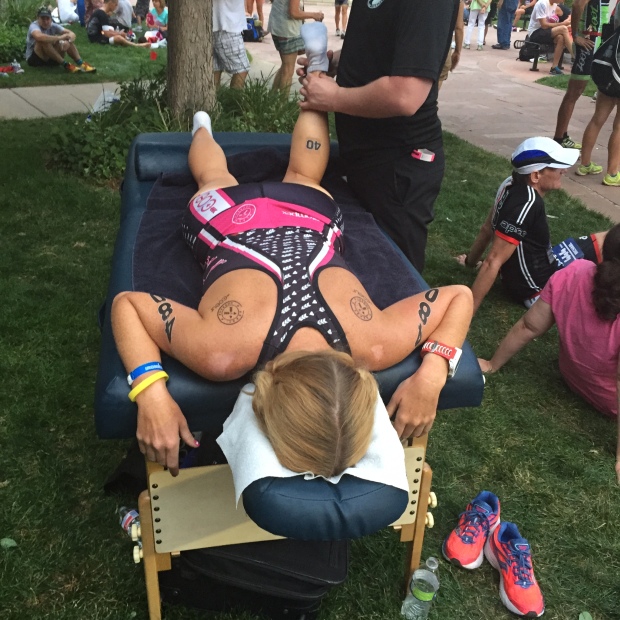 When I look at my time goals I would give myself a B+ for the day based on time but an A for effort. It really got dark in my head for a few miles. I started to wonder if I really have a chance of getting to Kona or am I not as strong as I see myself. But my body just kept going. I didn’t quit and neither did my body. And looking back at the pictures I am so proud of what I did on race day.

(so much for keeping it short)

*Photo credit for all these pictures goes to Stuart!