After I completed St. George in 2012 I wrote my report the very next day.  It has taken me two days to get to it this time because I don’t want this race to be over. I have a feeling the post race blues are going to be bad this time… Anyway, on with the report! For those of you that just want the numbers I will give you those first. You can see my Garmin data for the day here. Here are my official splits from the race.

Overall I am totally amazed with the day. I met my goals and I am so proud of the race!

Swimming is one of my stronger disciplines so the only part about this that I was nervous for was being in the water with 2500+ others! I got in early so I could start up front. I was only about three people deep back from the start line. I was so happy to bump into a couple of fellow Tower 26 swimmers and felt like that was a very good omen for the day!. Canon went off and we were swimming. The first 5 minutes was very congested but then I had a really nice patch of open water. That didn’t last long. It varied on and off like that until the first left shoulder turn. After that it was smooth swimming. I felt good and just wanted to get it done. The water wasn’t too cold and even though you couldn’t see ANYTHING it wasn’t yucky tasting/smelling water. I made it to the dreaded steps and was out of the water! My best case goal was 1:05 but I knew with the extra people it would be somewhere between 1:05 and 1:10 so I was happy with the swim.

I got my wetsuit stripped, ran for my bag and into the tent. The AMAZING volunteers helped me get sorted quickly and I was off to the bike without anything special to report. I did eat a Power Bar smoothie quickly in the tent and loaded myself up with my food.

The course is a three loop out and back. It is relatively flat except for a stretch up the Beeline Hwy. The problem was the wind. There essentially was a head wind on the way out and a tail wind coming back. The splits below pretty much sum it up!

Overall I was thrilled with this. Anything between 6:00 and 6:30  was a victory on the bike for me. I did get a drafting penalty and spent 6 minutes in the tent at the top of the turn around. People would pass you and then not keep moving. With the wind, passing was tough and I didn’t want to burn all my matches trying to get around people. I was too close and I won’t deny that; but I wasn’t drafting on purpose. Honestly I was so happy to have a chance to get off my bike for 6 minutes! I stopped two other times to fill up my water bottle. I am not that comfortable to do that while riding. I kept on top of my nutrition and water and just get pedaling! At some point during the bike I pushed a button on my watch that switched my view to the overall time. That actually was really helpful. There was nothing I could do about the conditions with the wind so I just rode at the effort I felt was right. I had done the training and I knew how I should be riding. I trusted that and just kept at it.

I very happily got off the bike and gave her a kiss goodbye. Not a single bike issue for me! Thank you Win’s Wheels! I took off my shoes and ran for my bag. I handed both things to a volunteer and peed. Into the changing tent I went. The volunteer helped me get sorted and I was out as fast as I could.

The goal was to run at least a 10:00/mile pace and hopefully get a 4:15 overall in the end. I felt great. The first mile clicked off at 8:44ish and I knew I had to watch it and not over do it. I wanted to run every step and really wanted to shine at this point. I had a feeling I could do it after a really successful monster brick I had done in training. Usually I am a pretty chatty runner out there but I was not talking very much. Not because I was running too hard but because I was so focused on the goal. Up until now I had stopped worrying about the overall time for the day. I thought the wind and penalty may have squashed my sub 12 hour goal. I didn’t want to over do it early in the run because I was trying to race the clock. I wanted a smart and controlled race more than the time. I did notice that if I held the 10 minute pace I was very close to the 12 hour time but I wasn’t looking too closely early in the run. The miles were clicking off between 9 and 9:15 and I felt totally fine. Others around me were dripping with sweat and breathing heavy and I felt totally fine and 100% in control. I planned what I wanted before each aid station and yelled it out to the volunteers as soon as I  got there. I mostly drank water, Coke and Red Bull. I had a couple bananas, some Gu chomps, one Cliff Gel, and a Power Bar smoothie but it was mostly liquids during the run. The thought of solids was not working for me. The crowds were amazing! There is nothing better than hearing your name while you are running. It helps SO much! I had seen Stuart out on the bike a couple times but I finally got to see him up close on the run. He brought me a chapstick because I lost mine on the bike. Usually I would have talked to him but I was so focused on the run all I could get out was “thanks” and “I love you”. Our friends from Arizona Thomas and Laura were out there as well. I kept giving them stuff I didn’t need anymore like extra food and then my sunglasses. It was so great to see friendly faces out there. By the end of the first loop I finally looked at my time to start doing the math. I realized that if I held a 10 minute pace I would be coming in under 12 hours!!! That was the goal. Keep running like I was and get it done. I felt totally fine. I never hit the “wall” and the only dark moments were those running under the bridges…because they were dark! I didn’t walk  single step and I never stopped. It was amazing! 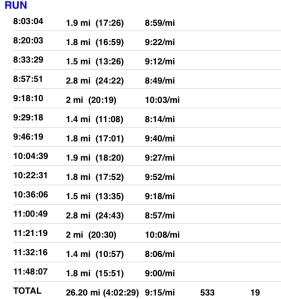 I made it to the finishing chute and enjoyed my last few steps and crossed the line! It was close to a 5 hour PR over St. George! I was so excited! I got my medal, shirt, picture taken and went to find Stuart. I crumpled down on the grass and spewed out all the things I had wanted to tell him about during the day. He is always there to listen to me no matter how many times I tell him something! I have a few more posts to come regarding the race. I want to do one about the gear I used, a nutrition one, and of course a thank you one. Below are a few pictures from the day. Thanks again for going on this journey with me. Knowing there were people who were tracking and supporting me from afar really carried me through the race more than you can imagine!

Lined up ready to start

I still need to get my head down!

A lot of ass grabbing!

SO happy to see Stuart!

The best part of the day!

I need to sit for a moment…