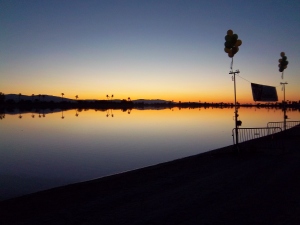 First tri of the year and it didn’t go as well as last year…but I made it through.  Leading up to this race a few things didn’t go my way.  First my IT band started acting up and then I crashed during the Tour de Palm Springs Century so I really wasn’t sure what I would be capable of for this race.  I am not trying to have a pity party for myself but things have been a little bit tougher than usual lately…so on to the race.

I was a little worried about the swim because my ribs have been sore ever since the crash so I really wasn’t sure how the swim would go.  The water was a lot colder than I expected and that made it even harder to swim.  Once the race started I really took my time and tried hard not to pull too hard.  Once I hit a rhythm and made it around the first buoy things felt pretty manageable. I got myself out of the water and was happy to see the majority of the bikes still in transition.  After struggling to get out of my wet suit I was on my way to the bike.

The course is very flat and I had ridden it the day before so I knew I just had to go out and hammer it as best I could.  This was my first race on my tri/tt bike and I was very happy to just get aero and do my best.  Overall, the ride came and went without incident.  Only real problem is that once again I got passed a bunch right at the end!  I hate that!

I rolled into transition and got out pretty quickly.  I really like just grabbing all my stuff and running out of transition.  There is plenty of time to sort it out on the run.  First two miles went pretty well and then the IT band reminded me that it hasn’t been very happy lately.  I tightened the IT band strap and tried to run again.  I was able to run the rest of the run but no where near as fast as last year.

Here are the details from the race:

I am happy to make it through the race considering everything that has been going on lately.  Highlight of the day was meeting some of my Dailymile friends for the first time.  And overall, the race was really well run from the expo to the food after the race.  It is becoming one of my favorite races to do.